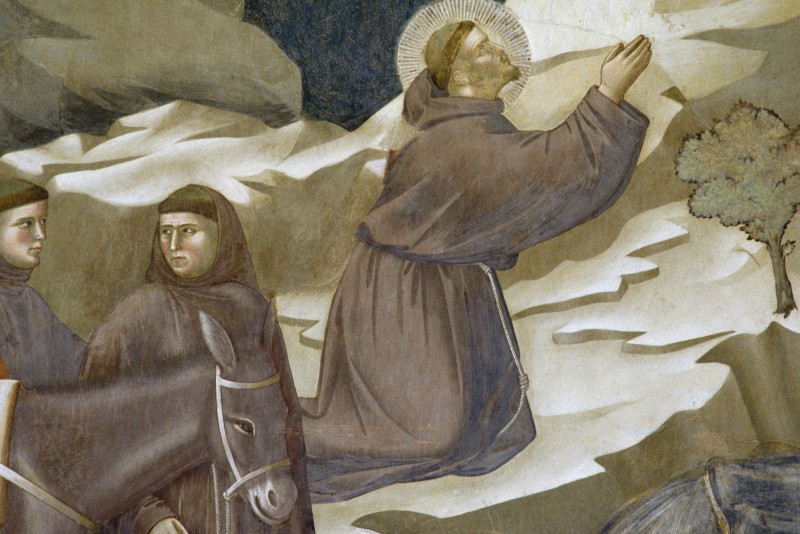 For those of us formed and educated for priesthood in the 1950s there was little connection with Franciscan formation. They were like trains on separate tracks. The one thing they held in common was the importance of the Divine Office. The rules were clear and the rubrics exact. The cleric was obliged to fulfilled his obligation daily which meant praying the psalms while moving the lips even in private and, when interrupted in the middle of a psalm, that psalm must start again from the beginning. If there was any Franciscan input, it seemed confusing and contradictory. No wonder since Francis himself seemed confused.

If one were to follow the Rule for Hermitages, composed in 1217, making it the oldest surviving written rule we have, it becomes obvious that there was no distinction between clerics and laics. The four brothers, taking turns at being the Marthas and the Marys, gathered together to pray the office at the appropriate times of the day. There is no mention of the celebration of Mass in the hermitage. By 1223, however, Francis himself made a clear distinction between clerics and laics. The clerics were obliged to pray the breviary, the laics were to pray a number of our fathers at the different Hours of the day. By the time of Francis’s Testament, if the clerics did not pray the hours “according to the Rule,” they were to be put in chains and brought to the Lord of Ostia for further punishment. This is a significant change in Francis’s perspective perhaps caused by ecclesiastical press. We must recognized the transition, a transition that remains in place until the liturgical reforms of the Second Vatican Council. Then things changed rapidly. Most of us went from praying the entire breviary to pray Morning and Evening Prayer, perhaps with sung Compline on Sundays and Holy Days.

Why did these changes take place? Certainly among Franciscans we moved from praying with the mind of Church, which implies duty, to praying with the mind of the Kingdom which implies it is here but not yet in its fullness. Previously we thought of church and kingdom to be the same. No longer. The Kingdom contained the Church but the Church was no longer seen as its equal. Much of this happened as we continued to profess the Rule of 1223 but we also became more aware of and sympathetic toward the earlier rule of 1221, seemingly closer to Francis’s heart than the later rule.

In Chapter 22 of this early rule Francis, obviously in imitation of Jesus Himself, teaches those who are going out on mission and possible martyrdom, how to pray. Using Jesus’s parable of the seed falling on the ground Francis is quick to point out that we must be receptive to the Word (10-18). This is fundamental to a Franciscan appreciation of prayer. We do not initiate prayer, we become receptacles for the seed to fall on good soil and grow, remembering also that we should not pick at the weeds but allow Jesus the Gardener to do so. Such an attitude leads to a “turning of the heart and mind to God” (19-27), thus making a “home and dwelling place for Him who is the Lord God,” which creates within us an attitude of prayer which is directed by the Father and the Spirit, centered on the Son (28-40). With this as background, Francis slips in the prayer of the Lord’s Supper making Jesus prayer his own (41-55). No wonder Celano proclaims Francis himself to be a prayer (I Cel, 115). Francis desire, however, is that each of us becomes a prayer.

The vision of Chapter 22 of the Early Rule guides every aspect of a Franciscan life of prayer. Prayer is not a duty to be fulfilled but a life to be lived. Francis presents himself as the “Herald of the great King.” Nowhere is this more evident than in the four prayer setting created by Francois Poulenc at the request of his nephew Friar James. Poulenc chooses as his first prayer of Francis in his cycle of four “A Salutation of the Blessed Virgin Mary,” Francis’ Lady and Queen who is “the virgin made Church,” through her receptivity of the Holy Spirit, echoing Chapter 22 and leading Bonaventure to explain that this moment was Mary’s Pentecost. Poulenc then moves to God Himself who is “universal and total good,” which points out for us that we participate in this goodness so that we are called to return to Him “everything that is good,” acknowledging that our goodness is dependent on God’s goodness.

The next prayer absorbs the person of prayer into God Himself, “let the burning and gentle force of Your love pervade my soul.” Poulenc concludes with Francis addressing brothers to listen. Listen. Good advice. Too often we talk too much in prayer and listen too little. By listening to theses prayers set to haunting music we are using yet another sense to experience the meaning of Franciscan prayer. One of the major obstacles that we must deal with is the ever present reality among some that we are obliged “to pray with the mind of the church.” As Franciscans, though, that clerical outlook must be balanced with Jesus’s command to Francis and to us, “Rebuild my church.” We have an obligation to rebuild our prayer lives individually and communally by accepting that first statement. We are not committed to words but to the Word. We need to rebuild the church by rebuilding its prayer life.

Before all else this requires humility. After all, being beggars is an essential part of our identity. We cannot be proud beggars. So with humility and understanding we begin to reshape our prayer to be more in tune with the prayer vision of Francis, a vision that never allows us to close our breviaries and think “Now that’s done.” We have only just begun. If our prayer does not spill out from the chapel into our activity, it is not Franciscan prayer.

Many years ago I read a line from Thomas Merton that lingers in my memory though I can no longer locate it. Some of his city friends who corresponded with him after he entered Gethsemane chided him for isolating himself from the cries of the poor, isolated, and disregarded multitudes in our cities. Merton responded by describing his nightly fire watch walking in the darkness of the monastery, telling his friends that those voices were loud and clear on the grounds of the Abbey. We need to hear those voices, too.

We Franciscans spent entirely too much time being unsettled over poverty without realizing that for Francis his life of poverty became a life of praise, Francis praised God not because He needs our praise but because Francis was overwhelmed with gratitude. In our rebuilding project we must do so with grateful hearts. Speaking of Thomas Merton, his beautifully positive and mystical liturgy of the hours Hagia Sophia deserves prayerful use by individual and fraternal groups of Franciscans interested in the wisdom tradition of Bonaventure. Its thoughts at Compline unite so much of what we have been reflecting upon:

“The shadows fall. The stars appear. The birds begin to sleep. Night embraces the silent half of the earth. A vagrant, a destitute wanderer. With dusty feet finds his. Way down a new road. A homeless God, lost in the night, without papers, without identifications, without even a number, a frail expendable exile lies down in desolation under the sweet stars of the world and entrusts himself to sleep.”

Such a reflection could easily move us from words to the Word.

We spend entirely too much time being unsettled over poverty without realizing that for Francis his life of poverty became a life of praise. Francis praised God not because God needs our praise but because he was overwhelmed with gratitude. So the second thing we need to rebuild our prayer live are thankful hearts. Prayer is not a duty to be fulfilled but a life to be lived.