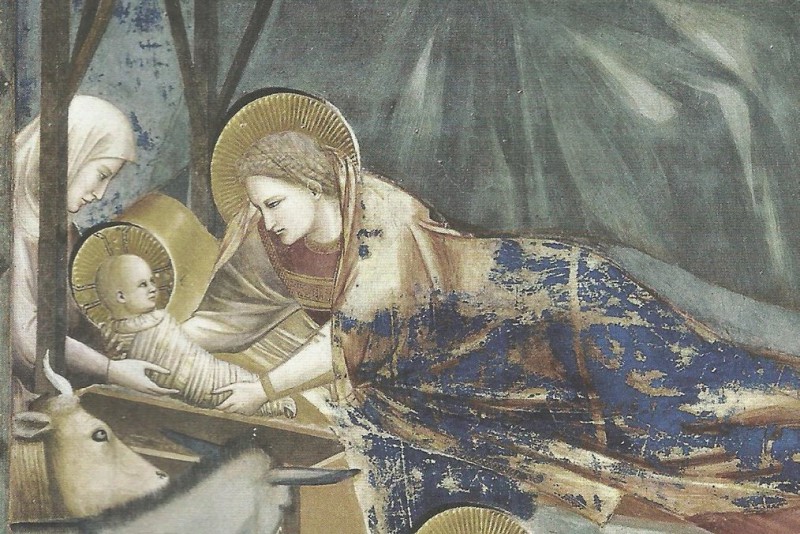 THE MANGER FRANCIS MADE IN CELEBRATION OF THE LORD’S BIRTHDAY

His highest aim, foremost desire, and greatest proposal was

to pay heed to the holy gospel in all things and through all things,

to follow the teaching of our Lord Jesus Christ

and to retrace His footsteps completely

with all vigilance and all zeal,

all the desire of his soul

and all the fervor of his heart.

Francis used to recall with regular meditation the words of Christ

and recollect His deeds with most attentive perception.

Indeed, so thoroughly did the humility of the Incarnation

and the charity of the Passion

that he scarcely wanted to think of anything else.

We should note then, as matter worthy of memory and something

to be recalled with reverence, what he did, three years

prior to his death, at the town of Greccio, on the birthday

of our Lord Jesus Christ. There was a certain man in that

manner of life. Blessed Francis loved him with special affection,

since, despite being a noble in the land and very honored

in human society, he had trampled the nobility of the flesh

under his feet and pursued instead the nobility of the spirit.

As usual, blessed Francis had John summoned to him some

fifteen days prior to the birthday of the Lord. “If you desire

to celebrate the coming feast of the Lord together

at Greccio,” he said to him, “hurry before me and carefully

make ready the things I tell you. For I wish to enact the

memory of that babe who was born in Bethlehem: to see

of his infant needs, how he lay in a manger, and how,

with an ox and an ass standing by, he rested on hay.” Once the

Finally, the day of joy has drawn near,

the time of exultation has come.

From many different places the brethren have been called.

the men and women of that land with exultant hearts

prepare candles and torches to light up that night

whose shining star has enlightened every day and year.

and, finding all things prepared,

he saw them and was glad.

Indeed, the manger is prepared,

the hay is carried in,

and the ox and the ass are led to the spot.

There simplicity is given a place of honor,

and out of Greccio is made a new Bethlehem.

delighting both man and beast.

The people arrive, ecstatic at this new mystery of new joy.

The forest amplifies the cries

and the boulders echo back the joyful crowd.

and the whole night abounds with jubilation.

The holy man of God stands before the manger,

contrite in his piety,

and overcome with wondrous joy.

Over the manger the solemnities of the Mass are celebrated

and the priest enjoys a new consolation.

The holy man of God is dressed in the vestments of the Levites,

since he was a Levite, and with full voice sings the holy

Here is his voice: a powerful voice, a pleasant

voice, a clear voice, a musical voice, inviting all to the

highest of gifts. Then he preaches to the people standing

around him and pours forth sweet honey about the birth of

the poor King and the poor city of Bethlehem. Moreover,

burning with excessive love, he often calls Christ the “babe

from Bethlehem” whenever he means to call Him Jesus. Saying

the word “Bethlehem” in the manner of a bleating sheep,

affection. He seems to lick his lips whenever he uses the

expressions “Jesus” or “babe from Bethlehem,” tasting the

word on his happy palate and savoring the sweetness of the

word. The gifts of the Almighty are multiplied there and

a virtuous man sees a wondrous vision.†c For the man saw a

little child lying lifeless in the manger and he saw the

deep sleep. Nor is this vision unfitting, since in the hearts

of many the child Jesus has been given over to oblivion.

Now he is awakened and impressed on their loving memory

by His own grace through His holy servant Francis. At length,

the night’s solemnities draw to a close and everyone went

The hay placed in the manger there was preserved afterwards

so that, through it, the Lord might restore to health the

pack animals and the other animals there, as He multiplied

his holy mercy. It came to pass in the surrounding area

that many of the animals, suffering from various diseases,

were freed from their illnesses when they ate some of this

hay. What is more, women who had been suffering with long

and hard labor had an easy delivery after they placed some

of this hay upon themselves. Finally, an entire group of people of both sexes

obtained much-desired relief from an assortment of afflictions.

At last, the site of the manger was consecrated as a temple

to the Lord. In honor of the most blessed father Francis,

an altar was constructed over the manger, and a church was

so that where animals once ate the fodder of the hay,

for healing of body and soul

would eat the flesh

of the immaculate and spotless lamb,

who gave Himself for us

with supreme and indescribable love,

who lives and rules with the Father and the Holy Spirit as God,

eternally glorious forever and ever.