Maria Vittorina Morelli was born on January 6, 1704 in Dunarobba (a very small Umbrian village in the territory of Montecastrilli and in the Diocese of Todi; in Italy), the only daughter of Erasmo Morelli and Felicita Salvi-Olivieri. She was immediately baptized, in the adjacent parish church of hers, by her uncle pastor don Lucantonio Morelli, who was also prior of the nearby rural parish church of saint Vittorina (one of the plebane ecclesiae scattered in the territory under the jurisdiction of the Benedictine monks). After a very short and severe childhood – dedicated almost exclusively to learning the faith, studying the Holy Scriptures and acquiring a high level of education – on June 21, 1717 she entered as a schoolgirl in the seventeenth-century Monastery of Capuchin Poor Clares of Montecastrilli (Umbria, Italy); previously she had spent a period of training at the Monastery of saint Caterina in the nearby city of San Gemini.

On January 16, 1719 – a few days after her fifteenth birthday – she wore the Franciscan habit of the Order of the Capuchin Poor Sisters of saint Chiara and the white veil of the novice; the following year – January 21, 1720 – her solemn vestment took place with the issuing of the vows of obedience, poverty, and chastity taking the name of “Sister Maria Lanceata”; perhaps foreseeing her painful mystical path and in particular the phenomenon of “transverberation” that affected her on August 10, 1721, on the occasion of an ecstasy in the choir of the Monastery in front of a precious Crucifix and in the presence of the Jesuit inquisitor Father Giammaria Crivelli. On that occasion, she reported the opening of a wound in the side, at heart level, as if she had been hit by a spear; her wound remained open – bloody and painful – throughout her life, which she bore with holy patience until her death. The whole life of Sister Maria Lanceata was intensely and profoundly dedicated to prayer, to the service of the community and to the help of the needy and the sick of the territory (particularly poor) who knocked on the "wheel" of the seventeenth-century monastery until August 26, 1762, when she took his last breath, putting an end to her holy earthly existentie.

The chronicles of the time recorded that the people, who came in large numbers to venerate her body, mourned her death, repeating with insistent sadness: “Our Saint is dead.” In the body of a wren (just over 5.50 Roman palms high) a huge heart had beaten and had lodged an unshakable faith and incredible energy, as described in detail in 1784 by the Capuchin Father Michele from Papigno,[1] her first biographer.[2]

The Exemplary Mystical and Religious Lesson

She wrote the Perfect Method of Mental Prayer (with a series of notes and reflections on method developed for praying intensely and effectively). This book was only published posthumously in Todi in 1772.[3] To better contextualize the mystical atmosphere: she converted to the Capuchin reality the model of the “inner castle” theorized by saint Teresa of Avila; she defined with effective simplicity and conciseness the spiritual model of the “inner cell".[4] Sister Maria Lanceata seems to anticipate what Abbot André Louf explored in depth and found:

“[...] at certain moments we feel, in faith, that there is a secret place in us, a real oratory, in which prayer never stops. God constantly challenges us in it, and we in that place experience being tied to him, in deep contact with him. In the Latin Middle Ages this place was called the domus interior, the 'interior house,' or the templum interius, the 'interior temple'.”[5]

“[...] the contemplatives of the church have instinctively perceived this secret affinity between the liturgy celebrated externally in the stone oratories, and that which is celebrated secretly, in the intimate of every believer, in that spiritual oratory that it is the heart of the baptized.”[6]

For a tiny cloistered nun – who practically spent her entire life silently and industriously inside a monastic cell – this "interior oratory" could only be called an “inner cell” which gives the strength of the dimension of concentration, silence and compactness of the mystical perimeter that concentrates and accompanies the precious “mental prayer”.[7] 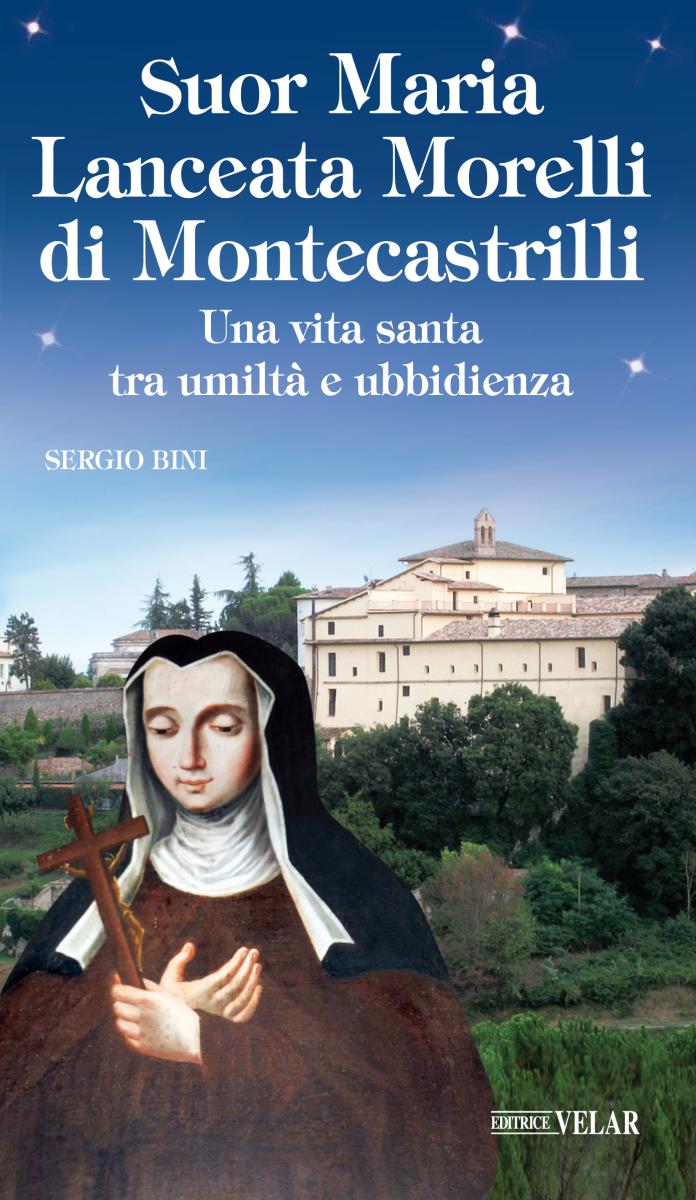 3. One of the "Vertices" of the "Triangle" of the Umbrian Mystical Poor Clares of the 1700s.

For her mysticism and her particular faith, Sister Maria Lanceata was the subject of assiduous and stringent checks, especially by the severe Jesuit Father Gianmaria Crivelli (vicar inquisitor of the Perugia branch of the Holy Office), who had been in charge to keep her under observation – in the capacity of extraordinary confessor – together with the other two important Umbrian “holy” mystics, very closely linked to each other: Saint Veronica Giuliani (1660-1727) and Sister Chiara Isabella Fornari (1697-1744). A recent book could help to better understand – making it seen from a more human angle – the personal history of the Jesuit Father Crivelli, which allows us to interpret his “inquisitive” behavior towards the three Umbrian mystics from another perspective; excessively rigorous, severe and heavy (as the biographies of the three great Mystics amply document). In this regard, Lorusso gives a voice to the Jesuit inquisitor almost as a public apology, in the last days of his life:

“He had received a difficult task to tell the truth: to investigate the veracity of the states of presumed bliss and holiness [in particular of the three Mystics]. He knew that self-love can lead us away from the Lord. This is why, perhaps sometimes with too much zeal, he had subjected the souls entrusted to him to hard and sometimes very hard, interminable tests. A thoughtful choice, for which he had always taken responsibility, despite the excess of zeal he had been reproached (...).”[8]

The three Umbrian mystics (considered saints, by popular acclaim, already in life) greatly worried the prudent Pope Clement XI and his successors to the point of calling an authoritative inquisitor to be able to keep them under better control. The situation had become more critical when the elderly noble cardinal Lorenzo Corsini – whose family owned a marquisate in Umbria and who owned castles and a rich land patrimony “close to the village of Montecastrilli” – became pope on July 12, 1730 (at 78 years old) with the name of Clement XII; he absolutely could not accept that the people, especially in their own territory, turned directly to Sister Maria Lanceata Morelli, knocking on the door of the Monastery of the Capuchin Poor Clares of Montecastrilli to ask for miracles.

It was no longer a secret for anyone, in fact, that our “little saint” was the holder, even in life, of all the signs of holiness: transverberation, ecstasy, osmogenesis, hyperthermia, and various “other supernatural gifts”.[9] It deserves to be remembered that even in the canonization process of Sister Chiara Isabella Fornari it was recorded that the Mystics had been seen praying together in the Monastery of Montecastrilli (guests of Sister Maria Lanceata), while remaining physically in their cloistered cells.[10] The figure that stands out overwhelmingly is, therefore, that of the Jesuit Father Giammaria Crivelli (Milan, November 4, 1684; Tivoli, September 26, 1760), the educated and experienced inquisitor who was ex officio assigned as spiritual father to the three “Mystics” who, thanks to their incomparable “qualities," managed to attract the faith of a growing number of people. Resigned to their condition of great misery, they resorted to the divine sphere in order to overcome the many difficulties of life, asking for the intercession of the three “Saints next door.” 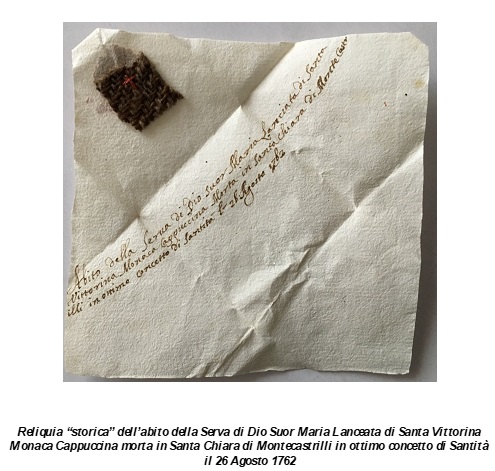 Relic of Sister Maria Lanceata Morelli of Montecastrilli [owned by the author].

4. medichessa and speziale: A Total Action for the Care not only of People's Souls

In addition to her intense and elevated, undisputed mysticism, Sister Maria Lanceata Morelli of Montecastrilli performed with great skill the position of nurse-doctor [medichessa] and apothecary [speziale] of the Monastery and, therefore, could, thanks to the medicinal plants cultivated in her own “hortus simplicium” (located in inside the larger “hortus conclusus” of the monastic enclosure) be of concrete help to heal both the sisters and the many needy with appropriate medicaments and interventions. At the time, in fact, the area was devoid of health facilities and doctors were very rare. Its remained “famous” for the medicines called “Cardosanto-Water” [using the Cnicus Benedictus plant], “Saint Luigi Gonzaga nuts” [using the fruits of the Juglans regia plant],[11] and the medicines obtained with green clay.

5. The Monastery of Montecastrilli: “Mystical Enclosure” and “Reliquary of Clarissen Spirituality”

It should be remembered that, by popular acclaim, after numerous miracles two years after her death (on September 18, 1764), in the presence of the ecclesiastical authorities, the body of the venerable nun was exhumed from the common tomb placed in the Church of the Monastery of Montecastrilli; it was found uncorrupted by time and after the planned recognition she was closed in a wooden case and placed behind the main altar and under the tabernacle of the Church of Saint Clare, where it continues to listen to the prayers of the devotees and to lovingly watch over the community. Even today, after 260 years, for the numerous faithful and devotees, Sister Maria Lanceata Morelli is a point of reference to which they can turn with devotion to ask for help, even if, as is the tradition of the people of this part of Umbria, the devotion occurs in an extremely discreet and very intimate way.

The ancient Monastery of saint Clare of Montecastrilli (Terni, Umbria, Italy) still hosts today an important community of cloistered Poor Clares which constitutes – in continuity with the consolidated experience since 1663 – a point of reference spiritual and material for the population and the territory. The nuns in recent centuries of national history have overcome many moments of real difficulty, which have also seen the expropriation of the building itself and their expulsion, especially in the first half of the nineteenth century, at the time of the Roman Republic and after the unification of Italy. [12] The Church of Monastery of saint Clare is located at the entrance to the historic center of the capital of Montecastrilli and deserves to be visited not only for its significant spiritual value, but also for that artistic, simple and Franciscan-Capuchin beauty of the seventeenth-century monument.

Sergio Bini is an engineer and president of the Italian Association for Quality Culture central-island AICQCI of Rome (Italy) [www.aicqci.it], a member of the Committee “Work and Integral Wellbeing” in the “Integral Wellbeing” Department of the Pontifical Accademy Mariana Internationalis - Vaticano; and a former lecturer of “Management of Human Resources and Organizational Well-being” at the LUMSA University of Rome (Italy) [www.lumsa.it/sergio-bini; e-mail: sergio_bini@yahoo.it].